Below you will find a threatening email that the administration sent to the AAUP Executive Committee on Tuesday (10/5/21) and our response which was reviewed and approved by our attorney.

This is the first administration since the AAUP was formed here at Rider that has stooped to threatening personnel action against the members of the Executive Committee. Such threats violate both the Agreement and federal labor law and we will take all actions necessary to protect our rights and the rights of every bargaining unit member.
​

The Email From the Administration
​

We are writing to formally notify you of the University's position with regard to the email communication sent to faculty on October 1 from Barbara Franz regarding Credo. The actions outlined in that email, should they occur, including calls that faculty not participate in the contractually initiated process of constituting a task force, and that faculty engage in "disruptive" actions, would violate our contract.

Article XXIII states: "The AAUP, its officers, agents, affiliates, members, and employees agree that, so long as this Agreement is in effect, there shall be no strikes, slowdowns, stoppages of work, concerted efforts not to meet classes, boycotts, or any other concerted acts that interfere with the normal operations of the University" (emphasis added). Further, Article XXIII memorializes that any violation of that clause "may be made the subject of a disciplinary action, including discharge or suspension" and "shall not be by way of limitation to any other remedy under law for such violation."

Please be advised that the University reserves all rights and remedies pursuant to the above language of our contract, advises you to rescind the October 1 communication and suggests that you share this notification with your membership.  Rider University has previously engaged in prioritization, and called for a task force composed of bargaining unit members. Such actions are normal University operations, and any union calls to not participate in and/or disrupt them will be treated in accordance with Article XXIII.

Thank you for your attention to this matter.

We assure you that this outrageous attempt to intimidate the leadership of the AAUP will not deter us. 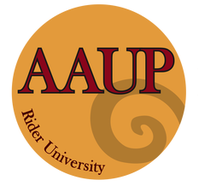