We wanted to provide some context and perspective to recent announcements and decisions by Rider's administration and the board of trustees.

While we are keenly aware of the global pandemic which affects our learning community, we are nevertheless committed to seeking fair compensation for our members and for ensuring that the university provides a safe and suitable learning environment for faculty and students in all of the university’s programs.

We are also keenly aware that our members have sacrificed six years of no raises and reduced benefits. Six years as inflation reduced the spending power of their income. Six years in which members of Rider's senior administration continued to take an ever-larger share of the University budget. These sacrifices by our members were negotiated to help put the university on sound financial footing.
​
It is worth noting that the cumulative full-time faculty salaries at Rider have declined since 2014 by $3.9 million.  However, between 2013 and 2018, according to IPEDS (Integrated Postsecondary Education Data System), the compensation for managerial employees at Rider increased by $3.4 million and the number of these employees increased by 36. 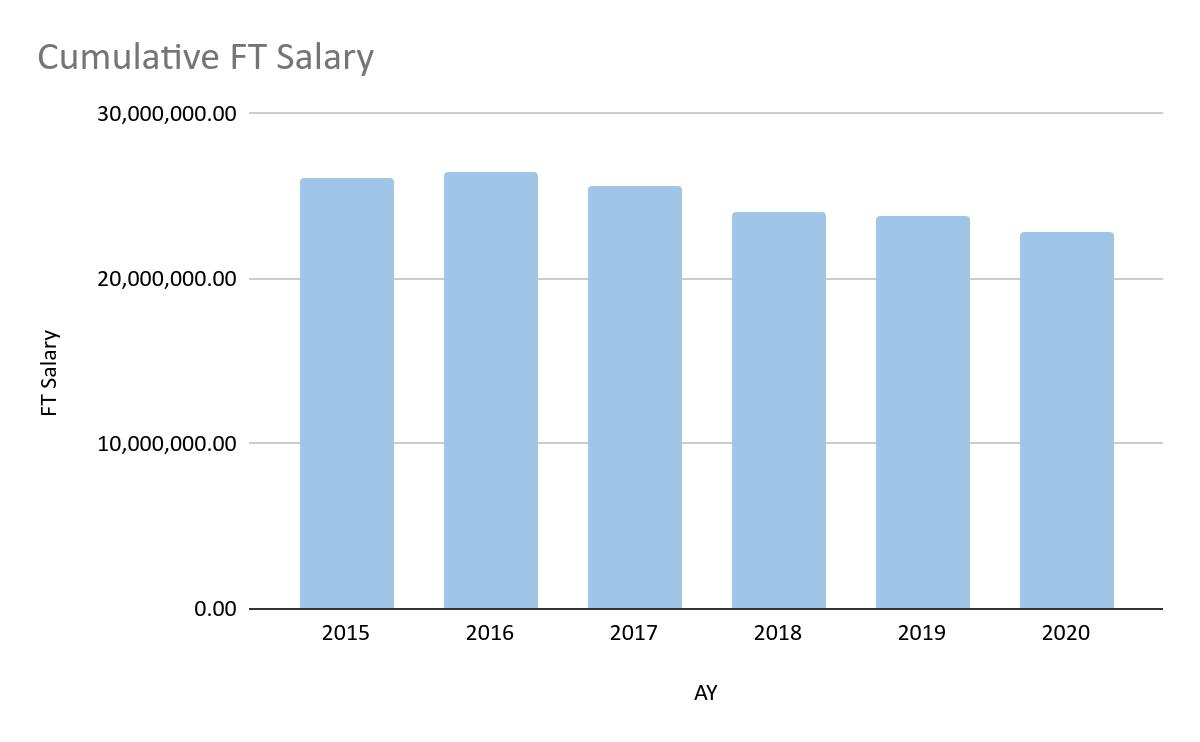 While other universities have halted large scale construction projects, recent communications from administration have insisted that the continued spending on various construction efforts is necessary, spending over $13 million on planned construction in the face of what they consistently refer to as “uncertainty.” These decisions have only added to their self-inflicted financial predicament. A letter from DonnaJean Fredeen to the Rider faculty included the following statement:


"We believe the decision to move forward with the [Westminster Choir College] campus transition at this   time is critical to best preserve current and future Westminster enrollments, as well as supporting the vision for the combined Westminster College of the Arts in Lawrenceville. The plan has been approved by the University’s Board of Trustees. (emphasis added)"

​
It is hard to see how the deeply contested efforts to uproot Westminster Choir College, with its clear causal reduction in WCC enrollments, is important to the “current and future Westminster enrollments.”  In fact, prior to President Dell’Omo’s relentless efforts to sell the Westminster Choir College property, annual freshman enrollments were consistently 100 students. This year, during the planned “transition efforts”, essentially a plan to move the college to a location without suitable facilities to implement the program, university recruiters were only able to convince 25 students to enroll in the college, a quarter of the freshman enrollments in 2015, the year before Greg Dell’Omo came to Rider, and a single year loss of approximately 1.6 million dollars in revenue.

The message from provost Fredeen also indicated that a decision had been made to postpone the addition to the Fine Arts Center, primarily a duplication of the facilities on the Princeton campus, thus rendering the ability to support WCC programs on the Lawrenceville campus all but impossible. Additionally, the President and Rider’s Board of Trustees have decided to forego improvements to the Science building, renovations which were intended to “provide Rider with a competitive recruitment advantage,” and have instead chosen to “invest” in duplication of existing Princeton facilities in Lawrenceville as part of a long-shot effort to try and sell the donated land on which Westminster Choir College resides.

So in response to a global pandemic and “uncertainty”, Rider’s administration is continuing to spend liberally to move students and faculty to a location where suitable facilities to house the program do not and will not in the foreseeable future exist, and without irony, they state that the move is to “preserve current and future enrollments.” It was doubtful that WCC would continue to attract students on the Lawrencville campus even with the promise of additional facilities by 2021. Any chance that that would happen now seems completely dashed. And any hope that the university will be able to grow existing science programs is equally dashed.

These decisions lack financial logic and only appear to make sense as some expensive face-saving measure. If Rider had a rich endowment and virtually limitless cash reserves, then such decisions would not concern us. But given Rider’s current fiscal situation, such dubious business decisions impinge on both the future of the university and upcoming negotiations over faculty status at Rider university.